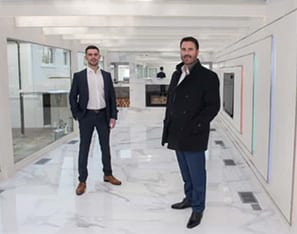 No Fee For Reproduction”Michael (right) and Nicolas Taggart of The Designer Builder, Taggart Homes at the launch of Coralmount on the Limavady Road in Derry-Londonderry. The exclusive development features six individually designed homes in a gated community and has been cited as Northern Ireland”s most luxurious residential development.

Taggart Homes will be honoured at an awards ceremony in London next month. The International Property Awards (UK) will be held on October 26, and Taggart Homes will be honoured for their project Coralmount, situated on the Limavady Road in the Waterside area of the city. The UK Property Awards are the largest, most prestigious, and widely recognised programme in the industry and Taggart Homes has been named as winners in the Residential Development category and the Development Marketing category, putting them at the top table in terms of property development and property marketing in the UK. Commenting on the win, Taggart Homes Director, Nicolas Taggart said: “We are truly gratified to have been named winners of not one, but two UK Property Awards.

“Coralmount is a project that was and is very close to our hearts, so to see our passion and hard work being recognised is a great feeling and we look forward to accepting our awards in London next month, where we will hopefully go on to be placed in the International Property Awards alongside winners from all over the world. There is a real sense that Derry is on a new trajectory now and it’s a very positive one. There’s such a ‘can do’ spirit about the place and we feel that Coralmount is a real statement about where the city is at now and more importantly where it is headed. This has been reflected by these awards and is putting the city on the map once again, in a positive light.” The top winners in each region and continent will be entered in to the overall international awards, culminating in a glittering awards ceremony, held at the Savoy Hotel, London, on December 3. The UK Property Awards are judged by an independent panel of 80 industry experts. Judging focuses on design, quality, service, innovation, originality, and commitment to sustainability.