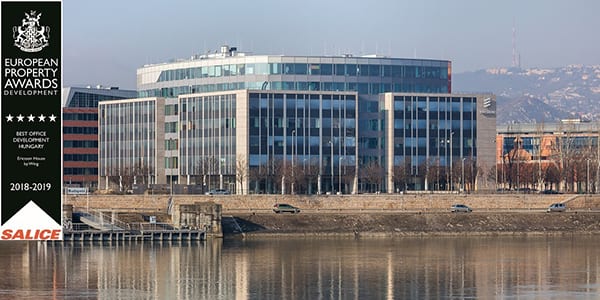 Three of Wingʼs Hungarian developments – the Ericsson House, ibis Styles Budapest Airport Hotel, and Kassák Residence – were honored in the first round of the European Property Awards, according to a press release sent to the Budapest Business Journal.

With a five-star rating, the Ericsson House was named “Best Office Development Hungary,” meaning that the property will be vying with other European projects for regional recognition in the next round of the competition.

“Ericssonʼs new office building is one of the most modern buildings in the country, weʼre proud to be its developers,” said Wing CEO and Chairman Noah Steinberg. “Weʼre very glad that our development was recognized by the industry, hence the unique building now has the opportunity to compete on the European level.”

Apart from offices, the Ericsson House also hosts one of the largest R&D centers of the Swedish company, one of Hungaryʼs most modern and largest server rooms, as well as the Ericsson Garage innovation workshop. The building is rented by Ericsson Hungary within the framework of a long-term agreement.

The European Property Awards have been acknowledging developments every year for a quarter of a century, currently in 45 different categories. The developments are evaluated by 80 experts in the industry, with criteria including project planning, quality, innovation, uniqueness, and commitment to sustainability.

The main, five-star awards are decided among projects triumphing in the national round of the competition, with the winners then competing with category winners in the worldʼs ten regions for the International Property Awards. The “Worldʼs Best” awards will be distributed in London this December.