1Series Elite, a new race series exclusively for the over 50s drivers launched earlier this year today presented the Jaguar XE SV Project 8 car that will be campaigned in next year’s inaugural running of the series. The car is being showcased at the International Property Awards, Royal Lancaster Hotel in London.

The Jaguar XE SV Project 8 has received high acclaim from the automotive industry and the media, with the car receiving enthusiastic reviews from across the globe. Series Elite will be developing the car to be race ready for testing in early 2019 ahead of the full season of racing. With a 5.0L V8 engine developing 600PS and a top speed of 200mph, Project 8 will deliver the power, handling and speed for great racing.

Series Elite launched in March this year, targeting high net worth individuals, with a minimum age of 50 years, and the unique premise of a racing series for novices who never had the opportunity to get involved in their youth, as well as more experienced drivers who raced in their younger days and still have the need for speed.

Since its launch Series Elite Founder, Graeme Glew, has been focused on putting together the right package for the target market and planning the build-up to the first race weekend. Choosing the SV Project 8 for this one-make series has been a highly beneficial development.

Graeme explains, “The opportunity to develop this awesome car into a fully fledged racer was one that I jumped at. Not only will our drivers own a fantastic race car, when they finally hang up their race boots, they can if they wish, convert their Project 8 back to a road going version, one of no more than 300 that will be made by Jaguar Special Vehicle Operations.” 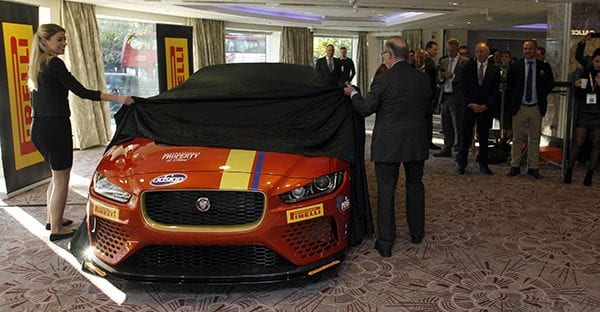 The plans for the Series have been quietly progressing, with a grid of mature like-minded enthusiasts well underway towards the next phase of the launch, with a UK and European testing schedule ahead of the first race weekend in May. Alongside this, Graeme and his team have been building an enviable portfolio of commercial and technical partners. A recent signing has been Pirelli tyres who will be the Official Tyre Partner for Series Elite.

Cars competing in the Series Elite will run on P Zero Trofeo R. These tyres are entirely road legal and are actually classified as a motorsport tyre, created by the same Pirelli team responsible for the company’s Formula 1 products. Essentially, it’s a track day tyre with minimal tread pattern. So, in extreme conditions, typical of circuit driving, it reacts with precision and provides high levels of grip.

The design of the tyre shoulder is specifically engineered to provide a precise turn-in, giving the driver a better feel and greater control. Generally speaking, the tyres are a lot stiffer than those made for normal road use, to guarantee stability at high speed. Trofeo R is available in 15 to 21-inch sizes; in the case of Series Elite, using a 20-inch version.

Series Elite will offer a turnkey racing opportunity and is designed to appeal to both amateurs and more experienced racers. Drivers will be provided with all the relevant training, testing and race experience needed to compete in the new series, with their cars stored and prepared at a centralised team facility. Series Elite will visit Silverstone, Donington, Brands and Hatch in the UK and an international finale event at Portimao in The Algarve the end of the season.

Graeme says of progress since launch, “The last six months have been an intensive period of developments and it’s another milestone for us with the showcasing of the Project 8 car at the International Property Awards event this week. We’ll be introducing the Series to a vey affluent, driven audience and offer them the chance to re-ignite an old passion or achieve an unfulfilled ambition.

“Our original plan was to hold a one-off ‘taster’ race weekend later this year. However, the car development and series preparation has led us to focus on an early 2019 test programme ahead of the inaugural race calendar. We’ll be giving our drivers even more track time and an opportunity to be race-ready and fully prepared for what promises to be a very exciting addition to the options for the more mature driver to go racing.”

He adds, “We’ve also partnered with a number of luxury brands that will be joining us at the event, like-minded businesses who work within the HNWI industry and meet their demands for exclusivity and enriching their lives.”

Potential Series Elite drivers can find out more at www.SeriesElite.com.