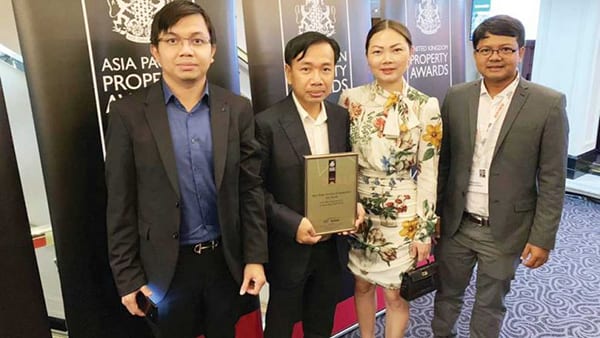 Property developer Peng Huoth Group has won a prestigious award for its Public Service Development project at the International Property Award in London this month, and outclassed several other world-class builders in the region.

Thre projects made it to the finals of the event and the Phnom Penh-based company’s Euro Ville Convention Hall project won the Public Service Architecture Award — thus emerging the winner in the Asia Pacific region.

The event was held at Savoy Hotel in London on December 3.

The company’s group CEO Thay Mengly said: “this is another new success for Peng Huoth Group that has made the national flag of Cambodia fly high and the group’s brand also stands high on the international stage in London.”

Peng Huoth represented Cambodia and competed with other participants from Asean and countries like Australia, China, India and Taiwan in the Asia Pacific region.

Thay said the success was largely due to the company’s efforts to offer the best quality, aesthetics and services to its customer which helped the company to become a leading player in the market.

“On behalf of the group, I would like to thank the management at all levels and to request them to continue their efforts to achieve the group’s goal of winning world’s best awards. Last but not least, Peng Huoth Group would like to thank all costumers for their continuous support and to have trust in us,” he said.

Peng Huoth, a leading property developer in Cambodia, with over 10 years of experience in building residential properties, is also involved in projects, such as shopping mall and commercial centers.

In May, Peng Huoth Group also received 13 awards, three of which are five-star- awards from Asia Pacific Property Awards held at The Marriott Marquis Queen’s Park Hotel in Bangkok, Thailand.

The International Property Awards are open to residential and commercial property companies from around the globe.