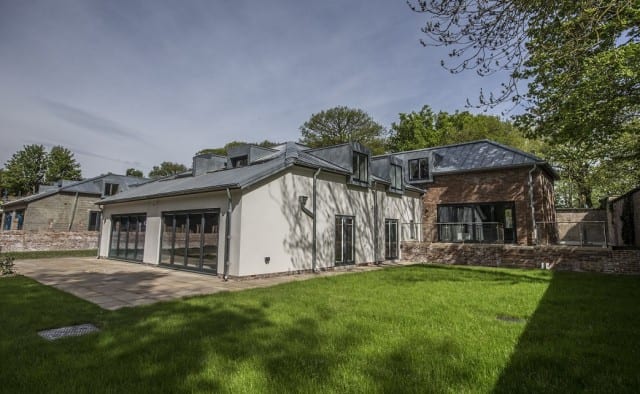 A north East housing project has won a prestigious award – one of two secured by Newcastle based developer All Saints Living.

The Walled Gardens at Gosforth, which comprises 14 executive homes, has been named Best Residential Development for Tyne and Wear in the UK Property Awards 2018/19.
The company will also pick up the Best Apartment for Scotland’s Highlands and Islands, for its conversion of Morar House, in Helensburgh, at the presentation ceremony to be staged in London next month.
At the event in the Royal Lancaster, on 26th October, All Saints Living will compete against the best property professionals from across the UK regions to be recognised as overall winner in the Best Development and Best Apartment categories.

Part of The High Street Group of Companies, established in 2006 and based in Stockbridge House, All Saints Living is marketing new homes throughout the north of England and in Scotland.

The Gosforth development is an £11 million project located within the grounds of Newcastle Racecourse. Set over two former walled gardens (north and south), dating from the 18th Century – and more recently a garden centre – the homes feature zinc and grass roofs, to mirror the glass houses and greenery which have occupied the site for over 200 years.
The south of the site has six luxury five bedroomed, semi-detached properties and the north, eight stylish four bedroomed detached homes. Features include galleried landings, bespoke oak staircases and bi-folding doors that open to private terraces.

Sonali Craddock, Marketing Director with All Saints Living, says: “We are delighted that the quality of our developments has been recognised by one of the property industry’s most prestigious bodies and hope more success will follow next month.”

The UK Property Awards – backed by Italian based supplier of opening systems and fittings for furniture, Salice – are judged by an independent panel of 80 industry experts, focusing on design, quality, service, innovation, originality and commitment to sustainability. They are in their 25th year and cover over 45 residential and commercial categories. Regional Awards are staged for Arabia, Europe, Africa, Canada, Central and South America, the Caribbean, USA, UK and Asia Pacific.