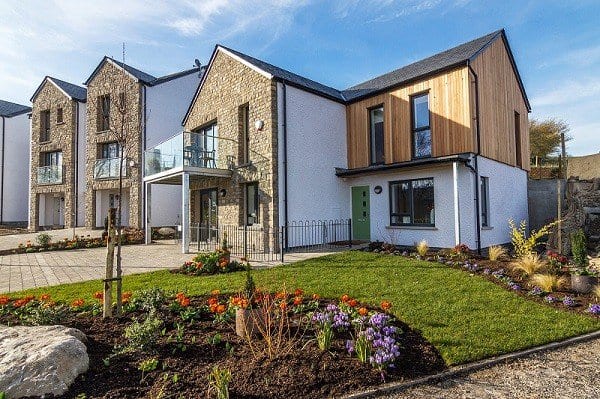 Cumbria-based housebuilder Russell Armer Homes has notched up another impressive win – the second in as many years – in the United Kingdom Property Awards 2019-2020. Outstanding new Kirkby Lonsdale development Oakfield Park captured the imagination of award judges in the category of Residential Development (Cumbria), securing a well-deserved success for the Russell Armer team.

Located on Kendal Road, close to schools and other local amenities, Oakfield Park is a beautifully designed development comprising 78 homes across two building phases, including 27 affordable homes for people with a local connection.

The new homes showcase a variety of property styles that help to create an established community feel in this beautiful residential spot on the edge of one of the region’s most picturesque market towns, bordered by open pasture, playing fields and tree-lined residential avenues. The landscaping throughout is exceptional, with effective use of hedges, dry-stone walls and trees and great consideration given to measures that will sustain and promote the proliferation of local flora and fauna – such as the inclusion of special ‘hedgehog highways’ and swift boxes.

Russell Armer Homes Architect, Richard Wood, commented: “We’re absolutely thrilled to have won an award for the second year running in a category that attracts the very highest standard of entry – and with two very different developments. Oakfield Park was a long time in the planning and we’re proud of all the hard work that’s gone into creating a development that will provide comfortable, contemporary homes for residents, at the same time conserving and supporting the area’s biodiversity.”

Now in their 26th year, the UK Property Awards are judged by an independent panel of over 80 industry experts who consider design, innovation, originality and commitment to sustainability when selecting award winners. Russell Armer triumphed in the same awards category last year with its Tenterfield development, a project that incorporated the renovation of a landmark building on Brigsteer Road, Kendal.

The official presentation of the Awards will take place at the The Royal Lancaster Hotel, London on the 25th October 2019. The highest scoring five-star winners from each category of these will be automatically put forward for re-judging against the five-star winners in other regions of the world – Asia Pacific, Americas, Europe, Africa and Arabia.